This is a repost of a project I published in 2017, in collaboration with Bri’s Glass of Wine. Sadly, I recently discovered that Bri has taken her site down. So I am posting this now on our site, because, frankly, I refer to it in a couple of subsequent blog posts, here and here. Plus, I happen to think it’s a pretty good post! Please enjoy!

Nestled in the heart of Sierra Foothills wine country lie what are reportedly America’s oldest producing Zinfandel vines. The Original Grandpère Vineyard (OGP for short) can trace its roots to the California Gold Rush era, with documentation dating back to 1869, and vines predating even that year. In keeping with Wild West tradition, the story of these vines is mixed with history, intrigue, and conflict.

Located in the beautiful, rolling hills of the Shenandoah Valley in Amador County, historical records identify the original owners of the vineyard as the Upton family. Over the years, ownership changed hands, Prohibition came and went, and White Zinfandel happened. In the 1970’s and early ’80s, the grapes produced in the vineyard were largely sold to make White Zin. In 1984, Scott and Terri Harvey purchased the land. At the time, Scott worked for Renwood winery. He named the vineyard Grandpere in honor of its age – Grand-père is French for Grandfather.

While working at Renwood, Scott Harvey produced wine from his Grandpère Vineyard for the Renwood label. Meanwhile, Renwood Winery trademarked the name “Grandpère”, and using cuttings from the original vineyard, started producing Grandpère Vineyard Zinfandel from their own vines in a different vineyard. Through a series of events, including disputes, lawsuits, settlements, and divorce, Scott Harvey and Renwood parted ways; the use of the name “Grandpère” is legally protected and limited; and Terri Harvey owns the 1869 vineyard on her own. That Gold Rush era vineyard, with its 1869 heritage, is now known as the Original Grandpère Vineyard. The terms of a settlement agreement require that vintners using these grapes must use that entire name, or nothing at all.

Fast forward to 2017, and the few producers who are fortunate enough to source fruit from the Original Grandpère Vineyard are making some outstanding, elegantly restrained, nearly 150-year-old, Old Vine Zinfandel wines. I recently attended a Small Plates & Vertical Tastings event, accompanied by my daughter and her friend, that was hosted by three of those wineries making Original Grandpère Vineyard Zinfandel: Vino Noceto, Andis Wines, and Scott Harvey Wines. By no small coincidence…OK, no coincidence at all…Zinfandel is one of my favorite grape varieties. According to my Vivino stats, Zin is second only to Cabernet Sauvignon as my favorite varietal wine.

Each of the wineries poured a number of their OGP Zinfandel wines, paired with small bites to complement each vintage. We started at Vino Noceto…

Our host, Bret, set us up at a cozy high-top bistro table, and got us started with the yet-to-be-released 2013 vintage, followed by the 2012 and 2008. The small bites for pairing included Genoa Salami with Sundried Tomato-Rosemary Fromage on Crostini (with the 2013), a Black Forest Ham and Cranberry Cream Cheese Spirals with Thyme Zinfandel Glazed Sweet Onions (with the 2012), and Dates Stuffed with Whipped Chevre & Cocoa Nibs (with the 2008).

The bites were perfect pairings for each wine; drawing out the nuances of the tannins, acids, and flavors in the wines.

Violet color in the glass. Aromas of blackberry and soft oak on the nose. Flavors of blackberry, boysenberry, cherry, and blueberry, with notes of spice and black pepper. Bright acidity with full, firm tannins. Long finish with dark berry, black pepper, and cherry notes.

Ruby color with brick colored rim. Aromas and flavors of raspberry, cherry, and ripe strawberry. Very soft tannins with light acidity. Medium finish with red berry and spice notes. (It was very interesting to notice the contrast one year makes; from 2013 black fruit and firm tannins, to 2012 red fruit and soft tannins.) 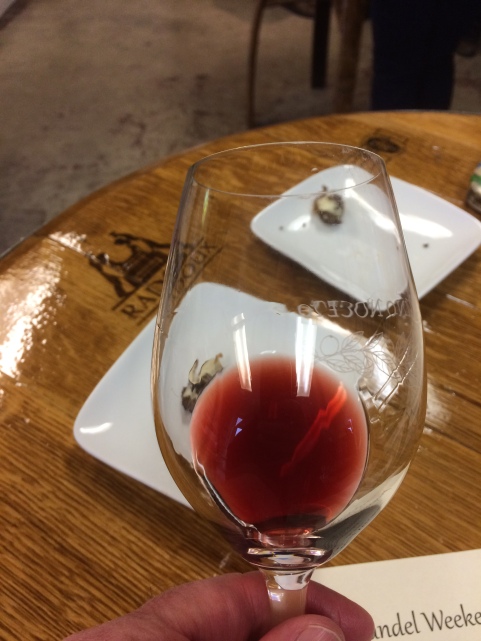 Brick red color. Nose of cherry and raspberry, with a hint of oak. Flavors of bing cherry, ripe raspberry, and spice. Tannins are soft and silky, balanced with bright acidity. Long, zesty finish with red fruit and spice.

Next we traveled all the way across the road to Andis Wines. Here, we were seated at a large table in a private room with other guests, and treated to a detailed history lesson by our host, Art. He confirmed my earlier research, outlined above, and then poured us two samples and distributed the matching small bites to complement the wines. At Andis, we enjoyed the 2012 and 2013 vintages. Art explained that the 2012 vintage was made entirely by the original Andis winemaker, Mark McKenna; however, the 2013 was started by McKenna, but completed by Napa winemaker Doug Hackett.  McKenna used non-traditional methods; fermenting in stainless steel, then adding oak chips and dust to introduce the oak influences. Hackett is more traditional, aging in oak barrels. The contrast in winemaking styles was definitely apparent. With the 2012, we enjoyed a Crostini with Whipped Chevre and Rose-Raspberry Jelly. With the 2013, the pairing was Artisan Bread with Aged Gouda and Dried Cherry Tapenade. Again, the pairings were excellent.

Ruby color. Nose of fresh raspberry and cherry, with a hint of soft oak. Flavors of sour cherry, raspberry, and ripe strawberry. Bright acidity with smooth tannins and a medium finish of red fruit flavors. My overall impression of this wine was “soft.”

Deep purple color. Nose of blackberry and spice. Flavors of blackberry, ripe raspberry, black cherry, and toasty oak. Medium acidity with firm tannins and a long, spicy finish. My overall impression of this one was “bright.”

To finish out the day, we traveled the few hundred yards down the road to Scott Harvey Wines. Here, host Kelsey greeted us at the tasting bar as set up our tasting and small plates. Scott Harvey presented their vertical in the reverse of the traditional order, starting with 2011 and moving forward through 2014. Scott Harvey wines are aged in neutral French oak. The tastes included Potato Chips with Point Reyes Blue Cheese-Zin Glazed Onion Dip (2011), Sopressata & Gouda Palmier (2012), Chicken & Chimichurri Empanadas (2013, and Chard Pesto with Whipped Cream Cheese and Crostini (2014.) 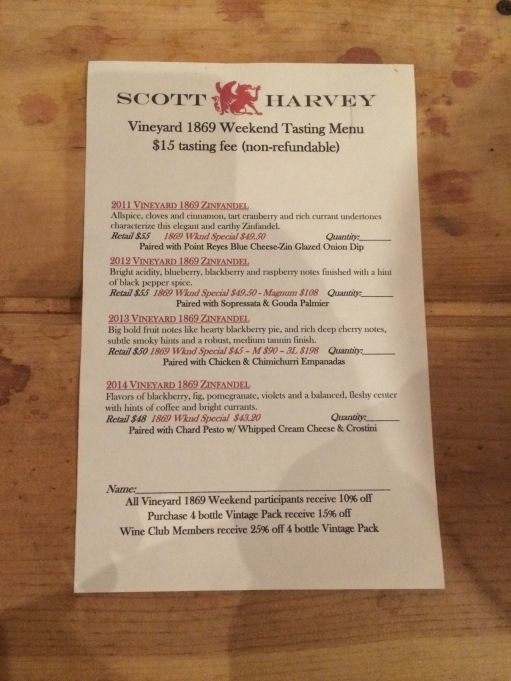 As an added bonus, Scott Harvey Wines compiled a “This Year in History” handout to highlight some other historical events that occurred in 1869. Did you know the Suez Canal opened the same year that the Original Grandpère Vineyard was recorded? Neither did I!

Given that Scott Harvey was in the middle of the multiple lawsuits surrounding the Grandpère name, he has abandoned the name entirely, and has dubbed his wines “Vineyard 1869.”

This was a fun, educational event, exploring the history and evolution of winemaking in the Sierra Foothills. The event weekend starts on Friday and includes a Prix-Fixe dinner with wine pairings, and a walking tour of the Original Grandpère Vineyard on Saturday afternoon. I was only able to attend the Small Plates and Vertical Tasting on Sunday, but I hope to go again next year to participate more fully. This is an annual event, so if you are in Northern California in January, look into getting tickets and enjoy a taste of California winemaking history.