Many wineries have tours. Visitors get to see the crush pad, fermentation tanks, and barrel room on the way to the tasting room. I have been on several of these tours, and always enjoy them. There is something enlightening in learning more about the processes that go into making this wonderful, enjoyable beverage. Still, I’ve often felt there was something missing in these tours: the vineyard. What goes on out there? I long to walk the rows, taste the berries straight from the vines, and learn more about the agricultural part of the process. Wine is, after all, the end result of months of patient and backbreaking farming. Then I learned about the Farm-to-Glass Vineyard Tour at Vino Noceto. I signed up immediately. 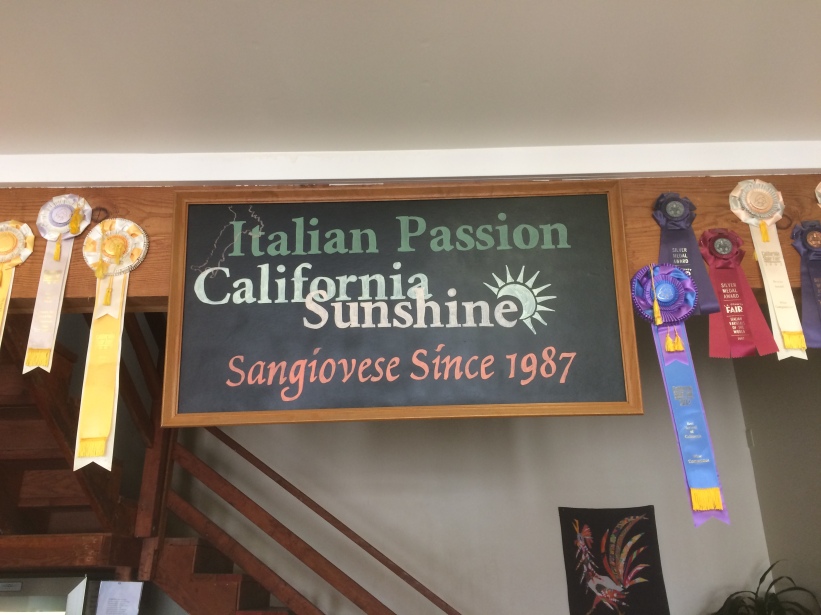 The Farm-to-Glass tour is often led by either the winemaker, Rusty Folena, or owner Jim Gullett. For my tour, a small group of just three of us, Jim was our guide, providing us with intimate details and insight into the history of the winery. It was fascinating to hear Jim relate his personal journey from just starting out; to the successful operation he leads today.

Jim and his wife Suzy purchased the land, formerly a walnut grove, in 1984. The name, Noceto, reflects a part of Suzy’s history. Suzy is from the city of Walnut Creek, in the east Bay Area of Northern California. Noceto is Italian for walnut grove. It is also the name of a town in Italy, located in the province of Parma. Noceto, Italy is the sister city of Walnut Creek, California.

In keeping with the Italian connection, Vino Noceto specializes in Sangiovese, the main grape used in Chianti. Vino Noceto is one of the leading producers of Sangiovese in California. This is quite a departure for a winery in a region known for Gold Rush-era Zinfandel vines, and the Rhone varietals many of their neighbors are producing. Still, Jim and Suzy had a passion, and they pursued it.

The tour began in the tasting room; just long enough to each receive a glass and a generous pour of Vino Noceto’s Clarksburg Pinot Grigio. Light, crisp, and delicious, this was a great way to start off! Jim grabbed his bottle caddy – more tastes awaited us along the way – and we headed off to the vineyard. 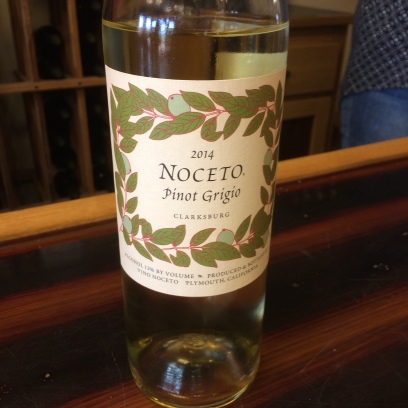 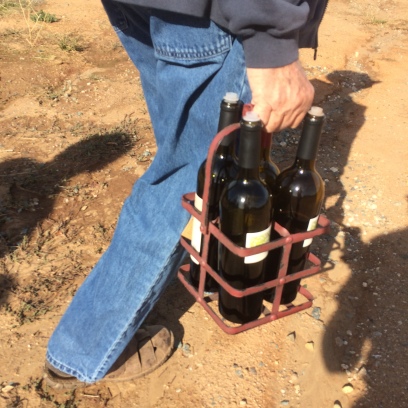 The next wine we tasted was the flagship Sangiovese Originale. We tasted the 2013, but the first release of this Chianti-style wine was in 1990. Light, ruby color in the glass with flavors of raspberry and cherry, and lively, balanced acidity. This wine is delightful on its own, and would pair exceptionally with a variety of foods. Jim said his vision was to create a “Chianti with California sunshine.” He didn’t want to simply imitate Chianti; he’s in California, and he wanted to allow the California influence to shine through. Mission accomplished, Jim! 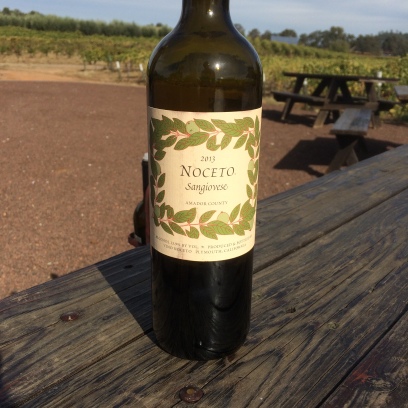 Many of Vino Noceto’s Sangiovese vines can be traced back to nine original cuttings. These were obtained from a neighboring winery that had procured them some years earlier, but decided to go a different direction with their production. Other vines came from various other sources, all of which can be traced back to Italy. Some of these other cuttings had originally been brought to the U.S. from Chianti via (ahem) a briefcase import in the 1970’s. So the Vino Noceto vines have some pretty prestigious, if shadowy, heritage.

The original vineyard plot is called Dos Oakies, because of two large oak trees that stood watch over the vines. One of these sentinels fell in a storm a few years ago, but the other remains, providing shade and shelter for vineyard tourists and wildlife alike.

As we walked through the vineyard, Jim informed us that Vino Noceto is a Certified Sustainable vineyard. After harvest and crush, the grape pressings are returned to the earth to help fertilize for next year. They also reclaim the water used in production. In addition, their winery and tasting rooms run completely on solar power, and investment that has already paid for itself.

Harvest was already complete on the day of my tour, but some fruit lingered on the vines. This enabled us to sample some of the berries. We tasted Trebbiano and Malvasia, both white grapes, and Sangiovese, Canaiolo Nero, and Aglianico, the latter two used as a blending grapes in Italian wines. It was interesting to note the differences in flavor, texture, and tannin, right there among the vines that produced the fruit. 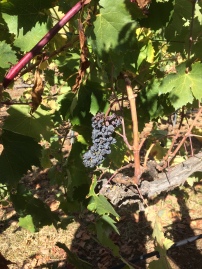 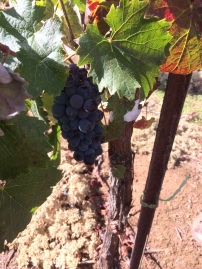 One the way to the winery building itself, we sampled two more wines; the Dos Oakies Sangiovese, a single vineyard bottling from that original vineyard block; and the Hillside Sangiovese. Both were stunning, and had the classic Chianti stylings, with that extra pop of California sunshine. The Hillside Sangiovese has just a hint more oakiness, giving it a fuller feel and flavor. Perhaps that is why it has won so many awards and high scores!

At the winery, the tour included a stop at the crush pad, where Jim explained the processes from harvest, to sorting and de-stemming, to crush. Then we moved into the fermentation room and barrel room. Jim detailed the processes, including such decisions as which yeast to use in fermentation, and the level of toast required for their barrels. 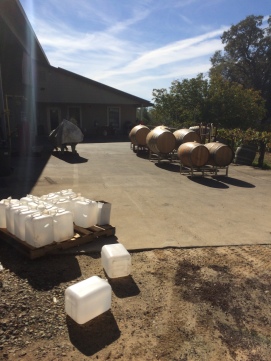 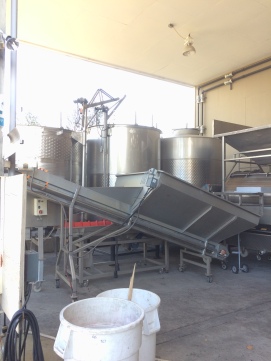 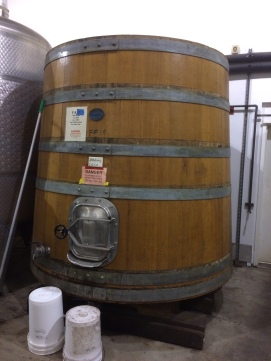 Though Sangiovese experts, Vino Noceto is a Sierra Foothills winery. Therefore, they also produce a Zinfandel. Using his wine thief, Jim got us a barrel taste of the 2016. It is already coming along nicely, and when released in a couple of years, will be a superb Zinfandel. As we left the winery, Jim poured us a taste from their current release, 2012 OGP Zinfandel, made with grapes from the Original Grandpère vineyard. Unlike many jammy, powerful Zins, this is a lighter, more restrained Zinfandel that really allows the fruit to show its stuff! 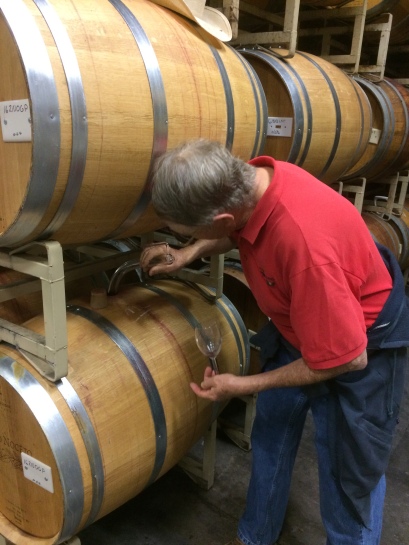 Normally when you hear “cult wine” you think of big, bold, in-your-face Cabernet from Napa. Would you believe: a cult white wine? Yes, Vino Noceto makes a Moscato blend called Frivolo. Slightly effervescent, and completely refreshing and delicious, Frivolo has a cult following, and its own wine club! That’s right, a club for a single wine. Members receive one shipment per year, in December – a case of the newly released vintage. While the 2014 is long sold out, the day of my tour the 2016 was undergoing cold stabilization. Naturally, as a good host, Jim got us a sample from the tank. Ice cold, but still delicious and flavorful!

The tour ended back in the tasting room, where Jim said his goodbyes and left us in the care of the friendly, helpful staff. There, we were offered more tastes of wines we didn’t try on the tour, plus opportunities to re-try those we had. Like so many Sierra Foothills wineries, tastings at Vino Noceto are complimentary. 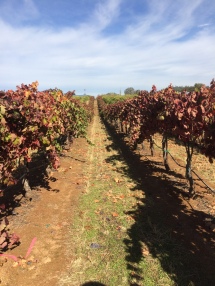 3 thoughts on “Farm-to-Glass at Vino Noceto”