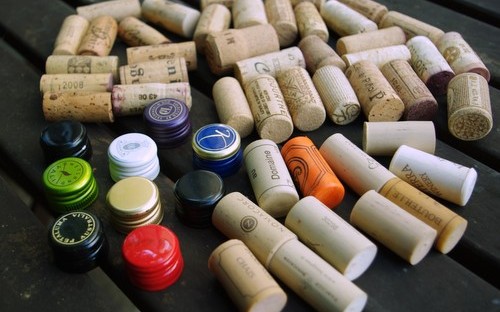 The debate over which is the best method for sealing a bottle of wine may never be resolved. Beyond practical matters, there are traditions and emotions that come into play. While there are many types of alternate closures, including synthetic corks and glass stoppers, for my purposes I am only examining traditional corks and screwcaps. There is a wealth of information on this topic available on the Internet. My challenge in this post is not one of finding enough to say, but rather it is keeping it short enough to be interesting, and keeping it out of “TLDR” (Too Long Didn’t Read) territory. I hope I’ve succeeded!

Throughout history, man has sought the best method for sealing and preserving wine.

With the rise of the Roman Empire, the Romans adopted wooden barrels. Thought to be invented by the Celts or Gauls, barrels are less fragile than clay amorphae, and with flat bottoms, rather than the pointed bottoms of amorphae, barrels proved better for long-distance transport. In addition, oak barrels can enhance the quality and flavor of wine.

Barrels are great for making, storing, and transporting wine, but in the modern world, they are not practical for the individual wine drinker. By the 1800’s, glass bottles arrived on the scene, providing an improved method for household wine storage and serving. The cork stopper was a natural companion for glass bottles, with the ability to cut the cork to the correct size to snugly fit in the neck of the bottle. [1], [2]

Corks have been the preferred method of sealing wine bottles for more than 100 years. However, cork has its faults, and in man’s ongoing quest for perfection and technological advance, alternative closure methods have come to market. Most popular among them is the screwcap. Cue hotly contested debate.

The Cork versus Screwcap Debate

Purists argue that cork is the only reliable method of sealing a wine bottle, especially for long-term aging. Cork does have a long history of success with keeping fine wine safe and secure for the long run. However, much of the argument in favor of cork is based in tradition and romance. The elegance of inserting the corkscrew, the long, slow, anticipatory pull, and the satisfying “pop” of the cork as it emerges from the bottle cannot be matched by a metal screwcap.

However, screwcaps have their advantages, too. Among the most obvious

is convenience. I have a collection of corkscrews…in the glove compartment in my car and my wife’s, in our picnic bag, in my luggage (per the TSA website, you can carry-on a corkscrew if it does not have a blade), and several others scattered around. Why do I have so many corkscrews? Because I have forgotten corkscrews so many times, and had to buy a new one to open a cork-sealed bottle of wine! Screwcaps eliminate the need for corkscrews entirely.

Environmental and economic concerns and cost also weigh in favor of screwcaps. Although cork is a renewable resource, it takes up to 27 years

for a cork tree to mature until it can produce stopper-quality bark.Once harvested, it takes nine years before the bark is ready for harvest again.[3] Corks cost an average of 11 to 13 cents each, while screwcaps cost around 7 cents each.[4] This may not sound like much of a difference, but consider that a winery producing 10,000 cases of wine will save up to $7,200 per year by using screwcaps.

Yet perhaps the most compelling argument in favor of screwcaps over natural corks is the elimination of the risk of cork taint. Cork taint is caused by a natural, chemical compound known as Trichloroanisole, or TCA. When a wine comes in contact with TCA, it damages the wine, resulting in stale, musty odors and flavors. These odors and flavors are often described as “musty”, “wet dog”, “wet newspaper”, or “sweaty gym socks.” Not pleasant. When a wine is tainted in this way, it is known as “corked.” (Many wine newbies innocently refer to wines sealed with a cork as “corked” wines, but when used properly, the term clearly has a much more insidious meaning.) Cork fans will argue, accurately, that TCA exposure can occur in other ways, including “cellar taint”, in which the TCA is present on other places in the production process, such as barrels or other wood surfaces.[5] However, the consensus is that the majority of tainted wine results from corks.

Yet despite all the screwcaps seem to have going for them, there remains the question of aging. Natural cork allows miniscule amounts of air to enter the bottle. Not enough to oxidize the wine (usually – see my post, Oh No! A Bad Bottle!) but enough to allow the tannins to soften and mellow, and the wine to age gracefully. Early screwcaps did not allow for this.

However, more modern screwcaps seals do allow for some oxygen exchange. Still, screwcaps continue to have the reputation of sealing only low quality plonk (Thunderbird, anyone?), cheap jug wines,

or entry-level wines from emerging, Southern Hemisphere wine regions. I contend that this is not a fair assessment.

Certainly, corks have a much longer track record, but with more than 40 years of usage, we are starting to see the results of some long-term aging of some high quality wines under screwcap. Plumpjack Winery, in Napa, is a well-known producer of high quality wines. They were an early adopter of screwcap closures, and shocked the wine world when, as part of a study in conjunction with the University of California, Davis, they sealed half their production with screwcaps. After 10 years, the wines were tasted by experts in double-blind tastings. Gavin Newsom, the former mayor of San Francisco, and currently the Lieutenant Governor of California, is also a partner in Plumpjack Winery. In an interview with Steve Heimoff, posted on October 6, 2015, Mr. Newsom discussed the results of the tastings[6]:

“Yeah, so many of these double-blind wine tastings, and all these experts all around us, and they’re absolutely convinced this one’s a screwcap and this one’s a cork. Without exception, the one consistent thing was the inconsistency. The outcome is challenged by the variability in the bottles that confounds you when you say “Screwtop’s not going to allow you any oxygen, or less oxygen, than the cork, so this is not going to age well,” and then you find out, when you taste it, the exact opposite.”

So even renowned wine experts from all over the world could not tell the difference between an aged, high-quality wine sealed with a cork compared to one with a screwcap.

Randall Grahm, the famed Rhone Ranger, is another big proponent of the screwcap. So much so, that on October 2, 2002, he staged a Funeral for the Cork in New York City, complete with eulogy by Jancis Robinson.[7], [8] Mr. Grahm also co-wrote and produced a humorous video in support of the screwcap (complete with cameo at the end):

I do not know if, or when, this great debate will end. In my interactions with other wine lovers on the topic, there are varying opinions about which closure is better. Sometimes discussions become animated; people can get awfully passionate about these things. Yet one thing that we can all agree on is this: more important that what is at the end of the bottle, is the quality of what is in the bottle. I’m fine with screwcaps. In fact, I prefer them in some situations. If you think cork is the only true way to seal a bottle, then only by cork-sealed wine. It’s really about personal choice and preference. In the end, whether it’s sealed with a cork or a screwcap, drink what you like!

2 thoughts on “Cork vs. Screwcap: The Great Debate”