If life is full of disappointments, Alexander Valley is a refreshing breath of fresh air. Robyn and I had been invited to attend Experience Alexander Valley, and we were looking forward to our Sunday Experiences; Yoga in the Vineyard for both of us in the morning, and a Spa Treatment in the afternoon for Robyn. Alas, a few days before the event, Rosie, from Alexander Valley Winegrowers contacted us to let us know that, because not enough guests had signed up for those two Experiences, the host wineries were forced to cancel them. Fortunately, however, there were plenty of exciting Experiences available from which we could choose.

So, Sunday morning we headed to Clos du Bois winery for an exploration of Marlstone Through the Years. When we arrived, our host, Chris, greeted us in the tasting room with a chilled glass of Lightly Bubbled Chardonnay; a delightful and refreshing unoaked, frizzante wine, perfect for the warm day. Thankfully, the previous day’s record heat had abated, and Sunday was more seasonal in the mid-80’s, so our tour of the demonstration vineyard, with chilled Chardonnay in hand, was quite pleasant.

You may know Clos du Bois; their “Classics” series wines are widely distributed in wine stores and supermarkets across the country. What I didn’t know, and you may not either, is that in 1978, Clos du Bois was the first winery in Sonoma County, and only the second in California, to produce a Meritage wine. Contrary to popular belief, the word Meritage is not French, and is not pronounced as a French word. Meritage is a term coined by a group of American vintners to identify American made, Bordeaux-style blends. The term is a conjunction, representing Wines of Merit, Vines of Heritage. The pronunciation rhymes with Heritage – as “Meri-tidge.”

Clos du Bois’ Meritage wine is called Marlstone. As Alexander Valley is a prime Cabernet Sauvignon region, Marlstone is dominantly Cabernet Sauvignon, with Merlot as the secondary component. However, in any given year, the blend can include some or all of the other five noble grapes; Malbec, Petit Verdot, and Cabernet Franc. Here’s where the real fun began!

After the vineyard tour and some barrel tasting, Chris escorted us into a private tasting room where we got to taste through all five components, and the finished Marlstone 2014. Once we had our baseline, we got to create our own blend to see how close we could come to the winemaker’s version. Each component was spectacular on its own, and it was amazing to experience the changes as we blended them in the glass. I don’t know how the others did, but my blend was nowhere near as good as the Marlstone! 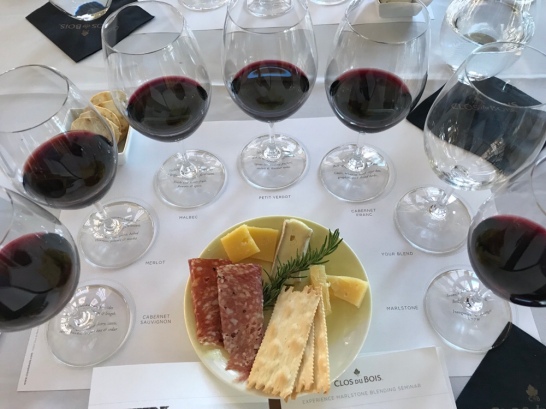 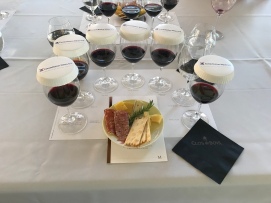 After lunch, Robyn and I parted ways again so we could cover more Experiences for you. (You’re welcome!) Robyn spent the afternoon at Trione Vineyards & Winery for a Bocce Ball Tournament, while I enjoyed a mountain-top Cabernet Sauvignon tasting at Alexander Valley Vineyards. Here’s Robyn to tell you about her Experience:

When I arrived at Trione, anticipating the Bocce Ball Tournament, they welcomed me outside with a glass of their tasty 2017 Sauvignon Blanc. I sipped on the cool, crisp Sauv Blanc under the trellis, parallel to two Bocce courts. I sat with Henry Trione, son of the founders, and learned about the family and winery history. Trione Vineyards & Winery was established in 2005. The winery building was completed in 2008. The winery is located next to an historic 1908, beautiful stone building, which the family restored and is now an event center. 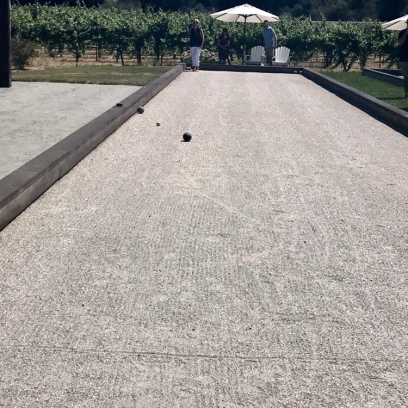 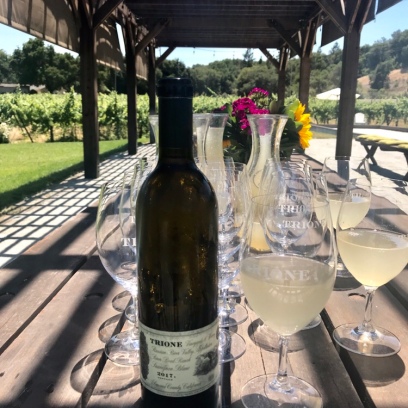 As the Bocce Ball Tournament got started, since Kent was across the valley, I needed a partner. Luckily, as promoted, there was a handsome instructor to teach me the rules. I was quickly “adopted” by wine club member, Meredith, and her husband. For a while, we were in the lead. Although not a Bocce veteran, I do enjoy a good game of corn hole, and my accuracy is not too bad. I think my dead-eye aim came in handy on the Bocce court! 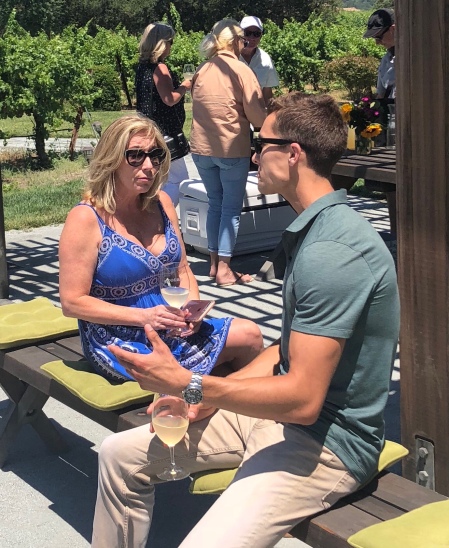 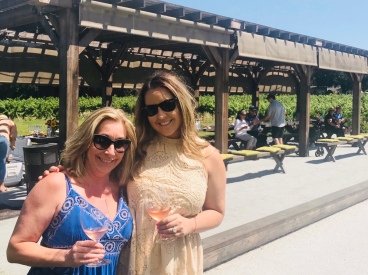 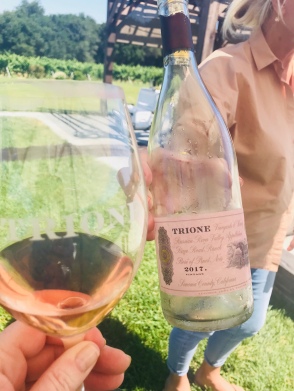 Adding to the friendly vibe, throughout the tournament, we sipped on Trione Rosé of Pinot Noir 2017. It was so good; I had to bring a bottle home to share with Kent. It’s a crisp and refreshing wine, and the perfect thirst quencher on the Bocce court. Sadly, our luck didn’t hold, and we lost the round. No worries, it was super fun and it’s always all about the company. Oh, and the wine! Cheers! 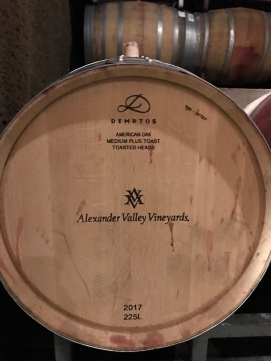 As we toured the property, Harry took us to The Adobe, the oldest structure in Sonoma County, and one-time home to young Cyrus Alexander. We also saw the old, 1868 Alexander School, a one-room schoolhouse, moved from its original location, just down the road, in 1972. Finally, Harry drove us up to a mountaintop picnic bench, set with a flight of Alexander Valley Vineyards Cabernet Sauvignon. We tasted through the 2016 Estate, the 2015 Organic, the 2014 Reserve, the 2012 Single Barrel, and the 1999 Wetzel Family Estate. I normally gravitate to slightly younger wines, but the 18 year old 1999 was amazing; mature, soft and subdued, yet still retaining juicy fruit notes. (Yea, I bought some.) I don’t know which was more amazing; the fantastic wines, the breathtaking view, or having 45 minutes to visit with the family partner of such an historic and wonderful winery. 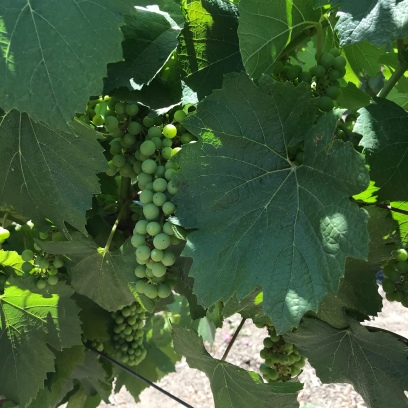 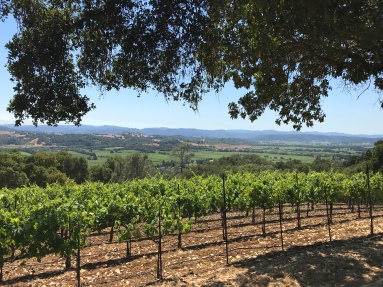 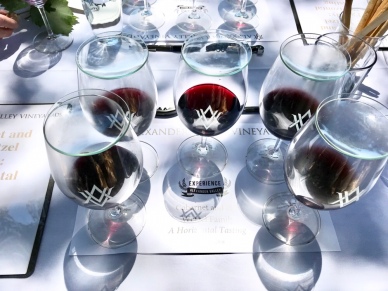 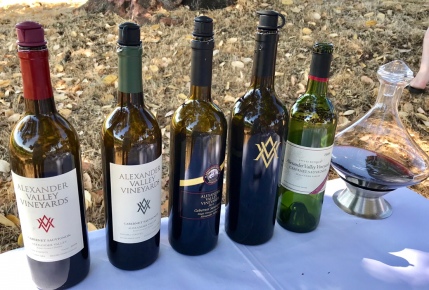 As we headed down the mountain back to reality, I got Robyn’s text that her Experience was winding down. Back across the valley, I picked up Robyn and we reluctantly headed home. We enjoyed our time at Experience Alexander Valley, and have a new love for the region. We will definitely be back!

Be on the lookout for next year’s event. We encourage you to come and Experience Alexander Valley for yourselves. Please. We really want to do Yoga in the Vineyard next year!