It was with eager anticipation that we set off on our journey to the first annual Experience Alexander Valley. We’d been invited as guests of Alexander Valley Winegrowers*, and based on all we’d heard about this new event, we knew we were in for something special. We wrote a couple of preview pieces, which if you missed them and want to catch up, you can read here, and here. But the previews don’t come close to capturing the magic and adventure that Experience Alexander Valley delivered.

* As guests, our event admission was complimentary. We received no other compensation or incentive. All descriptions, opinions, and reviews are our own.

Like many wine country events, this was a two-day adventure. Unlike many wine country events, rather than racing from winery to winery, guests got to choose two Experiences per day. Since we were invited as bloggers, to cover and promote the event, Robyn and I wanted to participate in as many Experiences as possible…to a point – we do enjoy each other’s company! So we decided “divide and conquer”, at least for a couple of Experiences. We each selected one Experience per day to fly solo, and one to attend together.

Saturday dawned clear and bright. And warm.  Weather forecasters predicted highs near 103F, and they weren’t far off. This meant that many outdoor Experiences had to be canceled or at least modified. Nevertheless, we were undaunted and headed from our hotel to Robyn’s first destination, deLorimier Winery. I’ll let Robyn tell the story of her Experience herself. Watch for her blog post in a few days.

I had a bit of a drive to get to my first Experience, at the Medlock Ames Winery. Though they have a tasting room on the valley floor, they wanted to treat guests to a Sustainable Winemaking Experience at their vineyards and production facility. The drive was beautiful, along the east side of the valley, then up Chalk Hill Road. The thing that struck me most: No Traffic! I was virtually alone on a Saturday morning in Wine Country.

Turning onto a single lane road, I started to get a little nervous that my trusty Google Maps might have failed me. It was a paved, single lane road, so that was hopeful. Alas, my trust in Google ran out two hilly ridges in. I turned around, beginning what would be a 30 minute detour that ended up taking me right back where I was. Around a curve about 100 yards beyond where I’d turned around was the entrance to Medlock Ames. Sigh. I’d done it to myself, and was almost 45 minutes late! 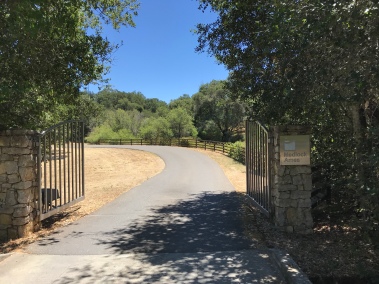 Fortunately, friendly Isabella saw my plight and left her post in the tasting room to rescue me. She came out into the already 90+ degree day, and caught me up with the small group on the outdoor tour. Isabella handed me off to Chelsea, who was leading the two other guests, Jimmy and Maryanne, on a tour of the grounds.

Medlock Ames is a sustainable, organic winery, and includes a one-acre vegetable garden, and a one-acre fruit garden. Due to the heat, we were not able to walk to those gardens, but still got a brief overview of the property and history. Chelsea led us to the shade of a large tree at the edge of a vineyard. There she told us that the two acres of vines were looking at were nearly ripped out when owners Chris Medlock James and Ames Morison purchased the property in 1998. The vineyard had been planted by the previous owner, a sheep rancher, and nobody knew what variety they were. Ames, the head winemaker, was hesitant, however, and decided to walk the vines before excavation. He found a tag on a vine, from a nursery in New York. After a call to the nursery and some research, and they found the answer: Merlot. But not just any Merlot. These vines are Jefferson clones; descendants of vines that Founding Father Thomas Jefferson brought from France to his Virginia estate! With that kind of pedigree, the former Tulane University roommates decided to leave the vines in.

All Medlock Ames are made from 100% organic, estate grown fruit. The winery is fully solar powered. Of the 338 acres on the estate, only about 55 acres are farmed, leaving the rest of the land to its native flora and fauna. There are more than 800 olive trees, five retention ponds for irrigation, and at least 50 barn owl boxes on the property. To help conserve energy, the barrel room is underground, below the production facility.

Speaking of the barrel room, where better to continue the tour on such a hot day? After a brief visit among the fermentation tanks upstairs, we ventured down into the 55 degree cellar to meet Ames, and enjoy some barrel tasting. 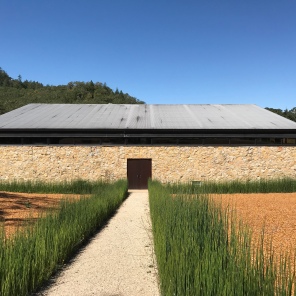 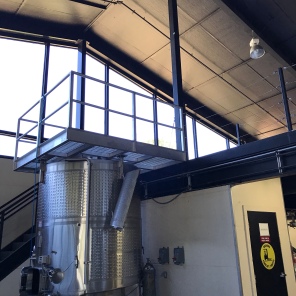 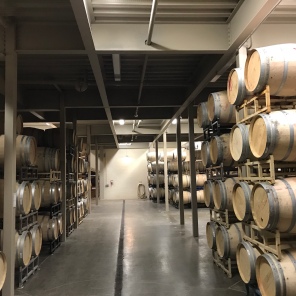 The beauty of the Experience Alexander Valley event is that the three of us had about 30-45 minutes of interrupted time with the head winemaker. (I was enjoying myself too much to keep track of time.) We could ask whatever questions we wanted, and he took the time to answer in a way we could all understand. You don’t get that on a party bus tour! 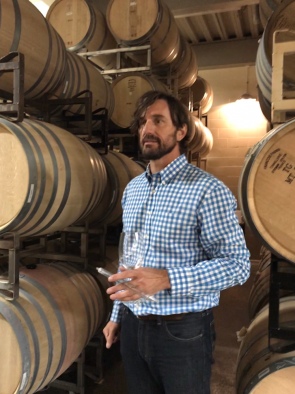 Ames is clearly passionate about what he does, and is very knowledgeable. He thieved us samples of their 2017 Lower Slope Chardonnay, the 2017 50 Tons Cabernet Sauvignon, the 2017 Kate’s & B’s Cabernet Sauvignon, and the 2017 Secret Ingredient Malbec. Each of the wines has a nick-name, and a story. The Kate’s and B’s is named after Chris and Ames’ wives; Kate is Ames’ wife, and B (stands for Bradley) is Chris’ wife. They chose the very best grapes from the very best vineyards to make the wine with their wives’ names on it. Smart men!

From the cellar, we walked back up to the tasting room where Chelsea hosted us in a wine and cheese pairing. The cheeses are all local, Sonoma County artisan cheeses, and paired each of the wine amazingly! I’ll let the pictures tell the story here. 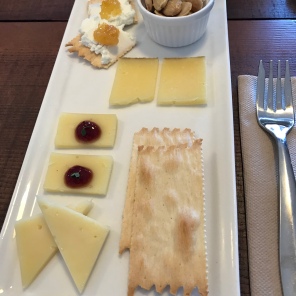 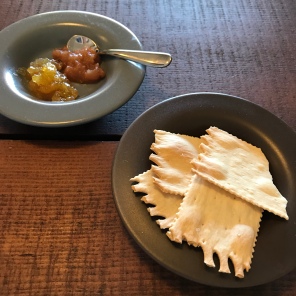 As we were finishing up, I got Robyn’s text letting me know her Experience was over, and she was ready for me to come get her. So I didn’t have time to explore the preserves, marmalades, and olive oils they make with estate fruit. No worries though; that gives me something to look forward to when I bring Robyn on our next visit!

After a quick lunch break, we headed to our next Experience, this time together. Turning up the tree-lined drive to Stonestreet Estate Vineyards, we were taken with the beauty of the property. Here, we were to enjoy a chocolate and Cabernet Sauvignon tasting. Originally scheduled outdoors on their beautiful patio overlooking the valley and nearby Mayacamas Mountain range, they thankfully relocated the tasting indoors, in their air conditioned tasting room. 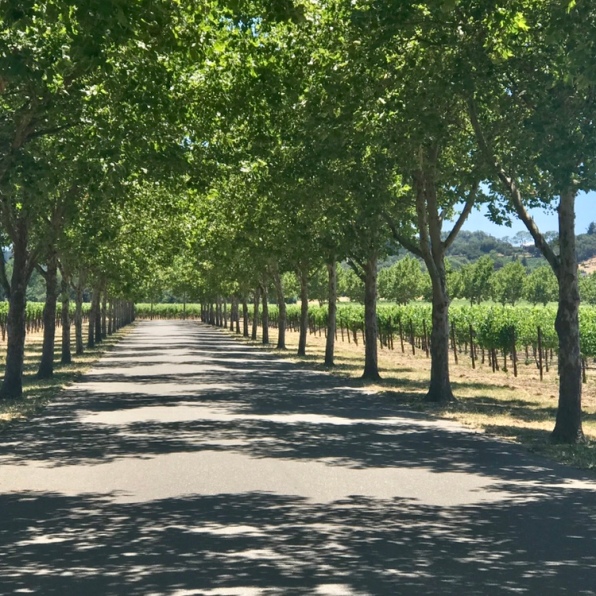 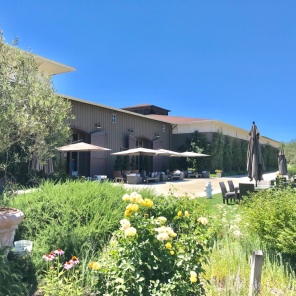 We were greeted by DTC (Direct to Consumer) Manager, Michelle, and our host and guide for the day, Tasting Room Manager, Samantha. Having never heard of Stonestreet before, we were in for a bit of a surprise.

Stonestreet Estate Vineyards owns a large chunk of the Mayacamas Mountains we had admired as we entered the property. 5500 acres, to be more specific. Yet of those 5500 acres, only 800 acres are planted to vines. Committed to sustainable and environmentally friendly winemaking, when the owners purchased the land in 1995, they conducted wildlife studies; migration patterns, breeding grounds, etc. and planted around those areas so as to not disturb the native wildlife. This also helps to keep the critters out of the vineyards. But that wasn’t the biggest surprise. Stonestreet Estate Vineyards is part of Stonestreet Farms, located in Kentucky. Stonestreet Farms breeds thoroughbred race horses, very successfully, including such standouts as Rachel Alexandra (depicted in the beautiful statue on the grounds.) The founder of Stonestreet Farms was Jess Stonestreet Jackson. Jess Jackson. Yes, the Kendall-Jackson Jess Jackson! Surprise! Who knew?

Now on to the chocolate and Cabernet pairing. Some might think that it is difficult to pair chocolate with Cabernet Sauvignon, and it can be. The wine is often too tannic to work well with the creaminess of the chocolate. But Stonestreet sent samples of the wines for the pairing to the local pastry chef they’d commissioned for the event. She, in turn, created the chocolate confections to match each of the wines. It was exquisite! While it was hard to select a favorite, if forced, I’d say mine was third from the left, the Chocolate Budino with huckleberry compote. Robyn fell in love with the Opera Cake (second from left) made with dark chocolate genoise, espresso cream, and topped with a sprig of lemon thyme. Each of the single vineyard Cabernet Sauvignons paired perfectly with the chocolates. 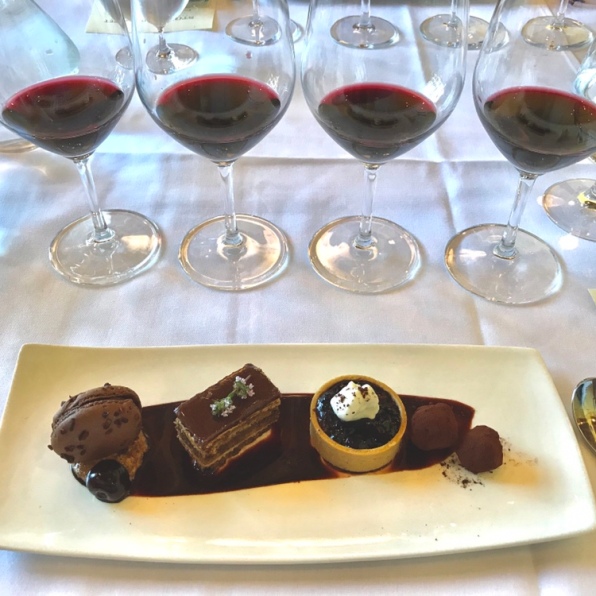 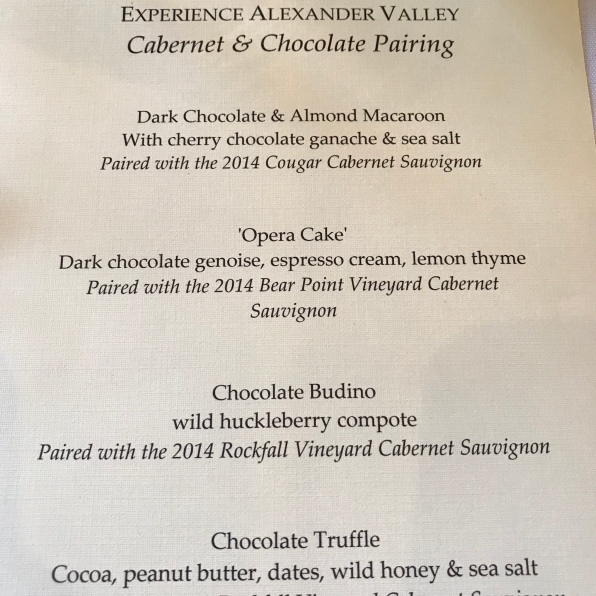 Running a little ahead of schedule allowed Samantha to give us a brief tour of the barrel room, and some photo ops. We also had a chance to sample their Meritage, Bordeaux-style red blend. Made from all five of the noble grapes, it was amazing! 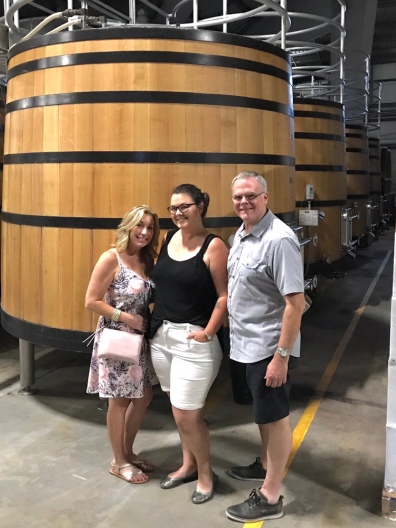 The biggest takeaways for us on Saturday were these: One, Alexander Valley is a hidden gem; a peaceful wine oasis mere minutes from the crowds and bustle of Napa. There was virtually no traffic all weekend, and no crowds, either. Sure, the heat may have kept some away, but Sunday was much cooler and yet no more crowded.

The other takeaway was this: though the lack of crowds was nice, Experience Alexander Valley was noticeably under-attended. Experiences had capacity for up to 24 guests. Of the four I attended, two had only three guests, one had four, and one had seven. Intimate to be sure, but really, folks, come out next year and let’s make this an event, an Experience, worth repeating! You’ll remember your Experiences forever.